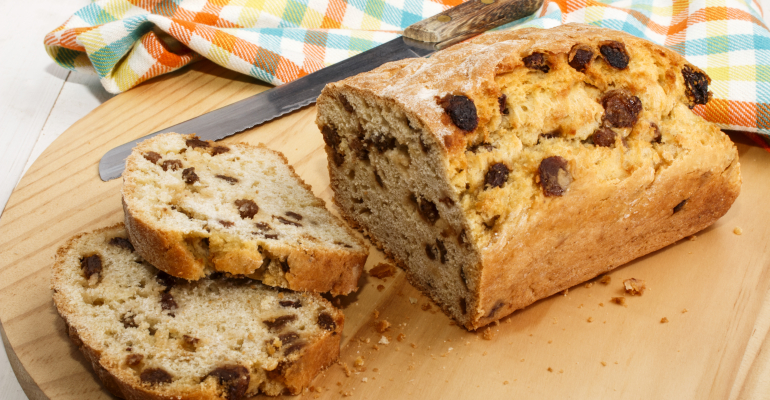 You’ll love to reach for cinnamon raisin bread when you’re craving a snack.

I have very fond memories of childhood on my grandma’s farm. She would always be baking something, and I was her official taste-tester. I loved it when she made me her famous cinnamon raisin bread.

There’s nothing like fresh cream butter smeared across a piping hot slice of homemade cinnamon raisin bread. Grandma would sip on her coffee as she ate hers and I’d sip on my hot chocolate. Such a wonderful memory! Food tends to do that to people, help them reminisce about days gone by. Did your grandma or mother have a special recipe that she made for you? Mine would definitely be this cinnamon raisin bread. You’re going to love making this!

I like to make cinnamon raisin bread as Christmas gifts.

This is one of the most scrumptious cinnamon raisin bread recipes that I’ve ever come across and it’s super easy to make. In fact, my 11-year-old son made a loaf of this bread all by himself the other day and it turned out amazing! He said the recipe was very easy to follow. I was super impressed by his efforts because he added the right amount of yeast and it proofed perfectly! I don’t think i even did that the first I worked with yeast!

Anyway, I hope you and your family enjoy this cinnamon raisin bread as much as mine do.

2 Place dough on lightly floured surface; gently roll in flour to coat. Knead 8 to 10 minutes or until smooth and springy. Grease large bowl with shortening or cooking spray. Place dough in bowl, turning dough to grease all sides. (If desired, at this point, dough can be refrigerated up to 4 days.) Cover; let rise in warm place about 1 hour or until dough has doubled in size. (If using fast-acting yeast, do not let rise 1 hour; cover and let rest on floured surface 10 minutes.)

3 Grease 2 (9×5-inch) loaf pans with shortening or cooking spray. Gently push fist into dough to deflate; divide in half. Knead 1/2 cup of the raisins into each half. Roll each half into 18×9-inch rectangle. Brush 1 tablespoon oil over rectangles.

4 In small bowl, mix 1/2 cup sugar and the McCormick cinnamon; sprinkle each rectangle with half of sugar-cinnamon mixture. Beginning at 9-inch side, roll up each rectangle. Pinch edge of dough into roll to seal. Press each end with side of hand to seal; fold ends under loaf. Place loaves, seam sides down, in pans. Brush oil over loaves. Cover; let rise in warm place about 1 hour or until dough has doubled in size.

5 Move oven rack to lowest position; heat oven to 375°F. Bake 30 to 35 minutes or until loaves are deep golden brown and sound hollow when tapped. Remove from pans to cooling rack. Brush butter over loaves; cool.

Quick Tip: Add a combination of both purple and white raisins to this bread for a great taste and pretty presentation when sliced.

You can find out more about which cookies we are using or switch them off in settings.

This website uses cookies so that we can provide you with the best user experience possible. Cookie information is stored in your browser and performs functions such as recognising you when you return to our website and helping our team to understand which sections of the website you find most interesting and useful.

Strictly Necessary Cookie should be enabled at all times so that we can save your preferences for cookie settings.

If you disable this cookie, we will not be able to save your preferences. This means that every time you visit this website you will need to enable or disable cookies again.